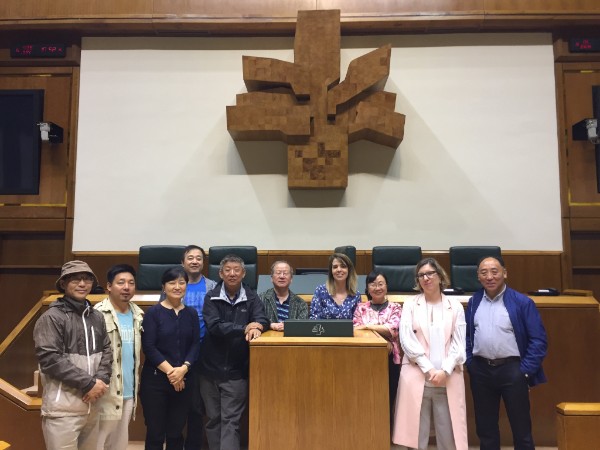 Workshop participants visit the floor of the Basque Parliament

From June 12-15, 2018, the Institute for Global Engagement (IGE) co-sponsored a workshop convening Tibetan scholars and community leaders, Chinese academics, and international scholars in the Basque Country of Spain to explore governance models in multiethnic states. Amidst Beijing’s increasingly hardline rule of Tibet, this workshop represents the only global platform where Tibetans have a full and equal seat at the table alongside Chinese and global participants.

The workshop was hosted by the University of the Basque Country’s Agirre Lehendakaria Center and George Washington University’s Elliot School of International Affairs. Tibetan scholars from Tibet University (Lhasa, Tibet Autonomous Region) and Qinghai Normal University (Xining, Qinghai Province) and Chinese scholars from Fudan University’s Center for National Minorities Studies, Tsinghua University’s Institute of International Development and Global Governance, and the Chinese Academy of Social Sciences’ Tibet Institute took part in the workshop. The workshop, titled “Asymmetric Governance in Multination States,” was the first meeting of the “Research Initiative on Multination States (RIMS),” an innovative effort to assess special status arrangements for minority nations across a diversity of contexts.

The workshop focused on the Basque experience as an autonomous community in northern Spain. The Basque people possess a distinct culture and language as well as a strong sense of national identity. For decades, the Basque Country’s relationship with the Spanish government was marked by violent conflict. However, a permanent ceasefire was achieved in 2011, and later on the dissolving of the militant separatist organization, in large part due to the broad participation of Basque civil society in the peace process. The Basque Country now possesses a high degree of political autonomy and is one of the most economically flourishing regions of Spain.

Juan José Ibarretxe Markuartu, president of the Basque Country from 1999-2009, gave the keynote address which focused on the Basque Country’s considerable success in excelling at several human development indicators over the past decade. Workshop participants also visited the Basque Parliament, a Basque-language K-12 school, and Mondragon Corporation, a Basque cooperative that is the 10th-largest company in Spain and employs over 74,000 people around the world.

This workshop is a continuation of IGE’s efforts since 2008 to establish a unique space where Chinese officials, Tibetan leaders (from both within Tibet and abroad), and international scholars can engage in frank and pragmatic discussion on issues related to the governance of the Tibetan Plateau. This initiative, called the “Tibet Governance and Practice (TGAP)” Initiative, has resulted in several groundbreaking meetings in China (Beijing, Shanghai, Qinghai), Canada (Montreal), the U.S. (Washington, DC, and Charlottesville, VA), and Norway (Oslo).