From 14-23 September, the Institute for Global Engagement (IGE) conducted a 10-day certificate training program on religion and rule of law (R&ROL) in Hanoi, Vietnam. For the growing network of experts and scholars in the field of law, religion, and society, the training continues to increase their knowledge and resources on good governance on religion in Vietnam and the Southeast Asian region. 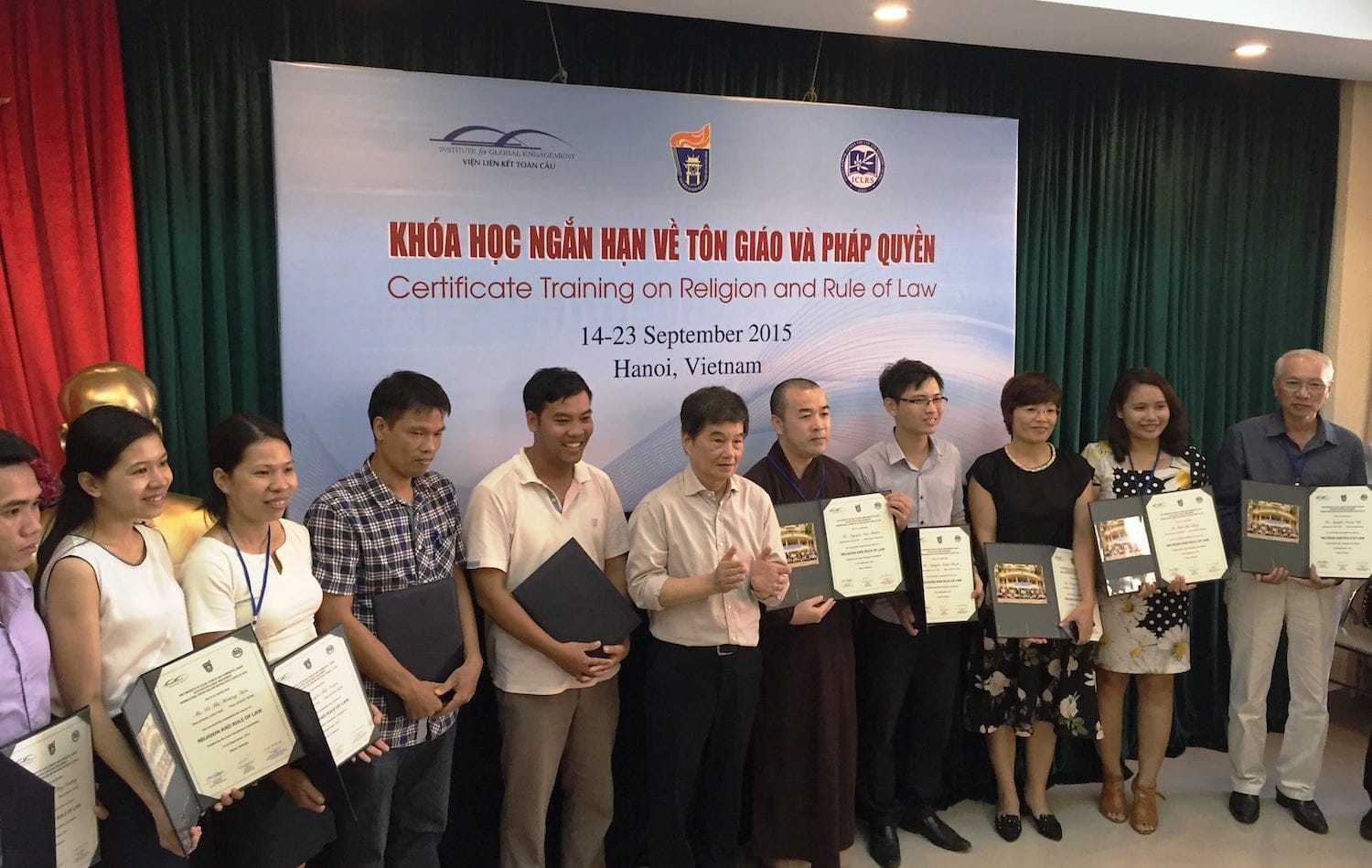 There were 68 participants from five provinces of the northern region of Vietnam. Participants included faith leaders, researchers, policy advisors, government officials working on religious affairs, professors, as well as Masters and Ph.D. students. The training was especially beneficial for participants conducting research on religion and its impact on the government and society. This training was the fourth training of its kind conducted in partnership by IGE, the International Center for Law and Religion Studies at Brigham Young University (BYU), and the University of Social Sciences and Humanities-Hanoi at the Vietnam National University. Previous trainings were held in 2014 (Da Nang), 2013 (Ho Chi Minh City) and 2012 (Hanoi).

The training introduced comparative perspectives and practices on religion and the rule of law in Vietnam and other countries around the world. The lectures and discussions focused on lessons learned about creating policies and laws on religion from various countries. This is particularly helpful to Vietnam as Vietnamese lawmakers are drafting the country’s first law on religion. Lectures were given by scholars, practitioners, and experts on religion and rule of law from Asia, Europe, and the United States. The program also intentionally included observers from Myanmar and Laos who will deepen regional ties among like-minded leaders. IGE will conduct the first religion and rule of law certificate program in Myanmar come December 2015.

This year’s training notably featured two presentations from IGE’s Center for Women, Faith, & Leadership (CWFL). CWFL Senior Fellow Margaret Weber spoke about the importance of addressing gender in law and religion and the correlation between religious freedom and gender empowerment around the globe. She also explained how society flourishes when women of faith are able to bring their values into public leadership. CWFL fellow and U.S. Navy Chaplain Judy Malana discussed the purpose and goals of military chaplains in the United States. Malana also spoke on how faith groups can make contributions to state-run services.

In addition to the certificate program, IGE and BYU were invited by the government’s National Assembly committee to provide feedback and recommendations on the current draft law on religion.

Vietnam’s VTV4 news reported on the 10-year anniversary of the VUS-IGE partnership, Religion and Rule of Law trainings, and the draft law on religion. The report was broadcasted on the air on 19 September (the portion on IGE’s visit starts at 20:00).

Updated on December 23, 2015: The program was also featured for 30 minutes on a segment called “View from Hanoi,” aired by Vietnam’s National Television, VTV4.

During the program, the Vice Chairman of the Committee on Religious Affairs, Mr. Bui Thanh Ha discussed how the Vietnamese constitution and policies demonstrate the positive changes and efforts that the Vietnamese government has toward ensuring religious freedom for its citizens. For example, the number of religious groups legally recognized by the government increased from 3 to 39 in 2015; attitudes toward religion are seen as more positive; and, the contribution of religion to culture and morality was recognized.

The program also highlighted the process of drafting Vietnam’s first-ever religion law. The National Assembly has appraised the draft law based on feedback and recommendation of Vietnamese citizens and experts on religion and rule of law. The draft is currently being revised for next round of National Assembly’s review.

About the Institute for Global Engagement – The Institute for Global Engagement works at the critical intersection of religion and global affairs, building sustainable environments for religious freedom worldwide. Through local partnerships, IGE works transparently to convene, connect, and build consensus among government, religious leaders and scholars to ensure that people of all faiths and none have full freedom of conscience and can participate as equal citizens in public life. To learn more about IGE’s programs, please contact James Chen at jchen@globalengage.org.