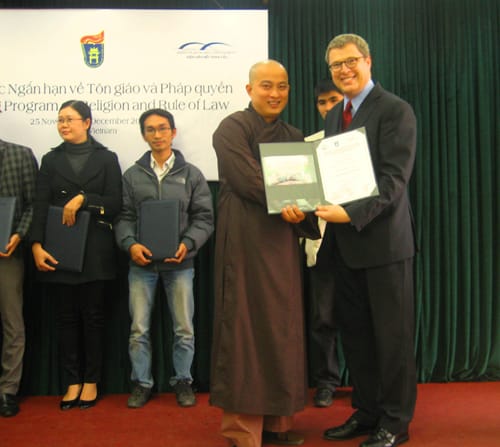 From 26 November to 5 December 2012, IGE, Brigham Young University, and the University of Social Sciences and Humanities in Hanoi co-conducted the first-ever ten day certificate training program on Religion and the Rule of Law in Vietnam.

The purpose of the certificate program was to train an emerging generation of scholars, government officials, judges, and religious leaders on international and comparative approaches to religion and the rule of law. The training—using both comparative and interdisciplinary training methods—helped to build an emerging intellectual foundation as they develop a new legal infrastructure that contributes to religious freedom and the well-being of society.

The program also included a one-day academic conference. The conference focused on the legislative process and international comparative studies on religion. In addition to the 80 students participating in the certificate program, additional Vietnamese senior-level scholars, governmental officials, policymakers, and religious leaders participated in this conference. Furthermore, a number of students took a one-day tour to visit Vietnamese religious sites including Protestant and Catholic churches, a Buddhist temple, and a Muslim mosque in Hanoi.

At the end of the program official certificates were awarded to students who successfully completed the training program.