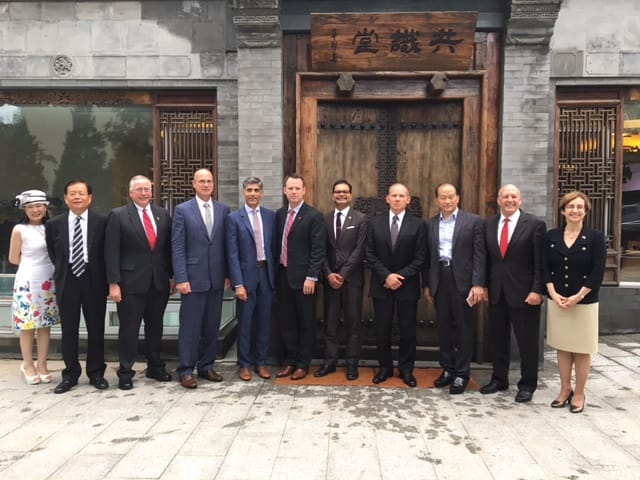 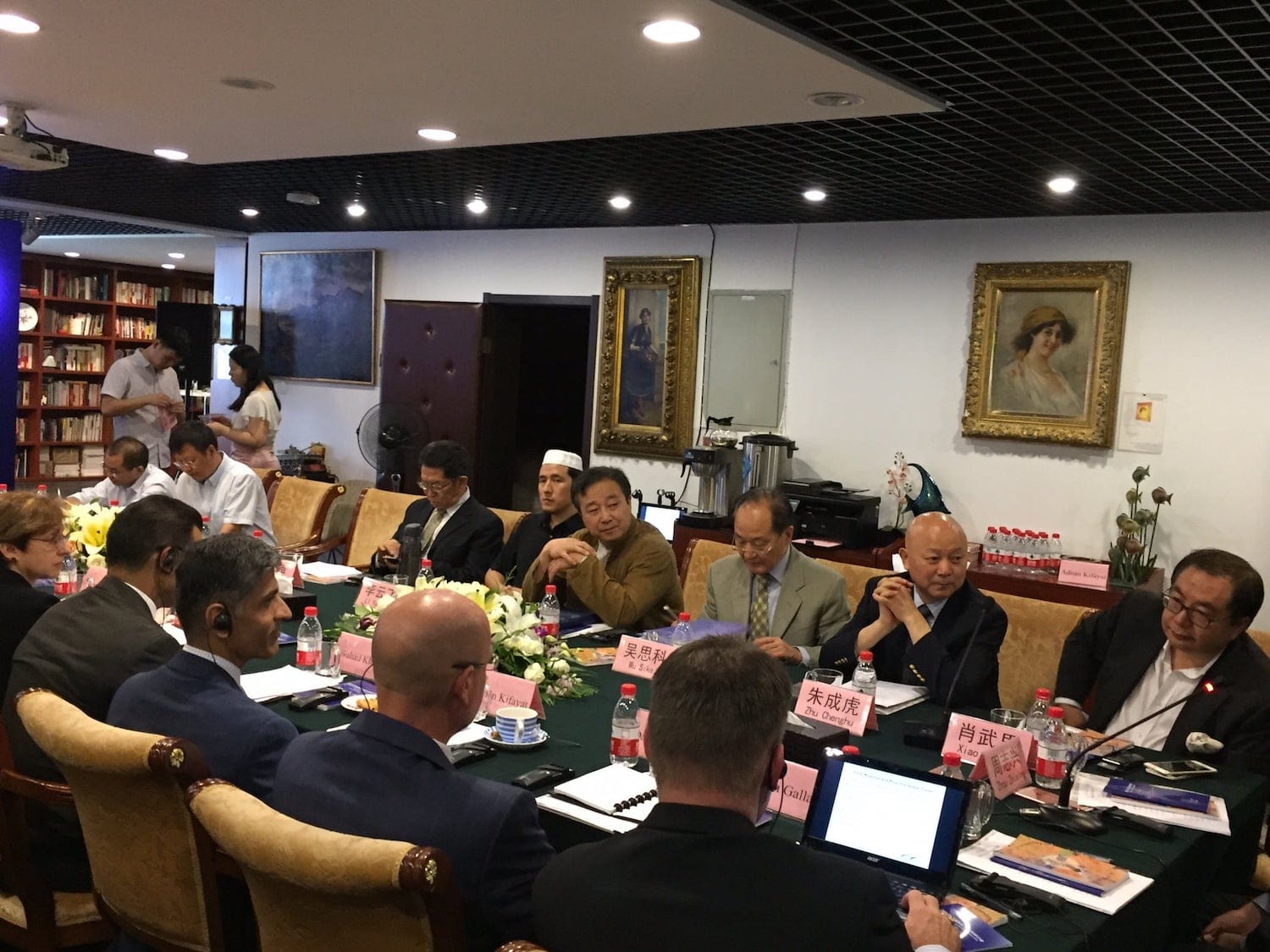 On the Chinese side, participants included scholars from leading Chinese universities and think tanks, a former general, a former ambassador, as well as business, media, and religious leaders. 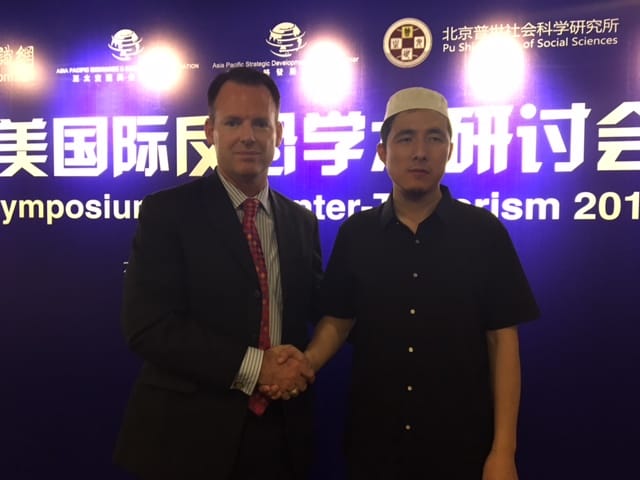 John Gallagher, President and CEO of the Institute for Global Engagement with a Chinese participant, a Muslim Imam from China's Shandong Province. 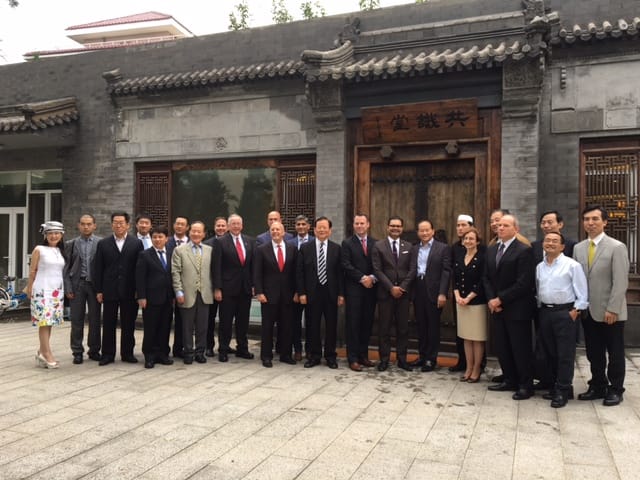 The symposium was convened by Consensus Media Group, the Pu Shi Institute for Social Sciences, and the Asia Pacific Exchange and Cooperation Organization and was held at Consensus Hall in Beijing. 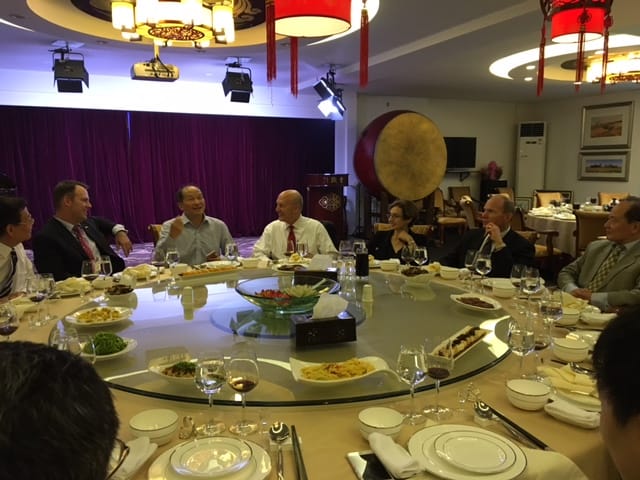 The "track 1.5" format of the symposium not only allowed for the candid exchange of ideas and experiences related to counterterrorism and countering violent extremism, but also helped to deepen understanding and trust between U.S. and China on these issues. 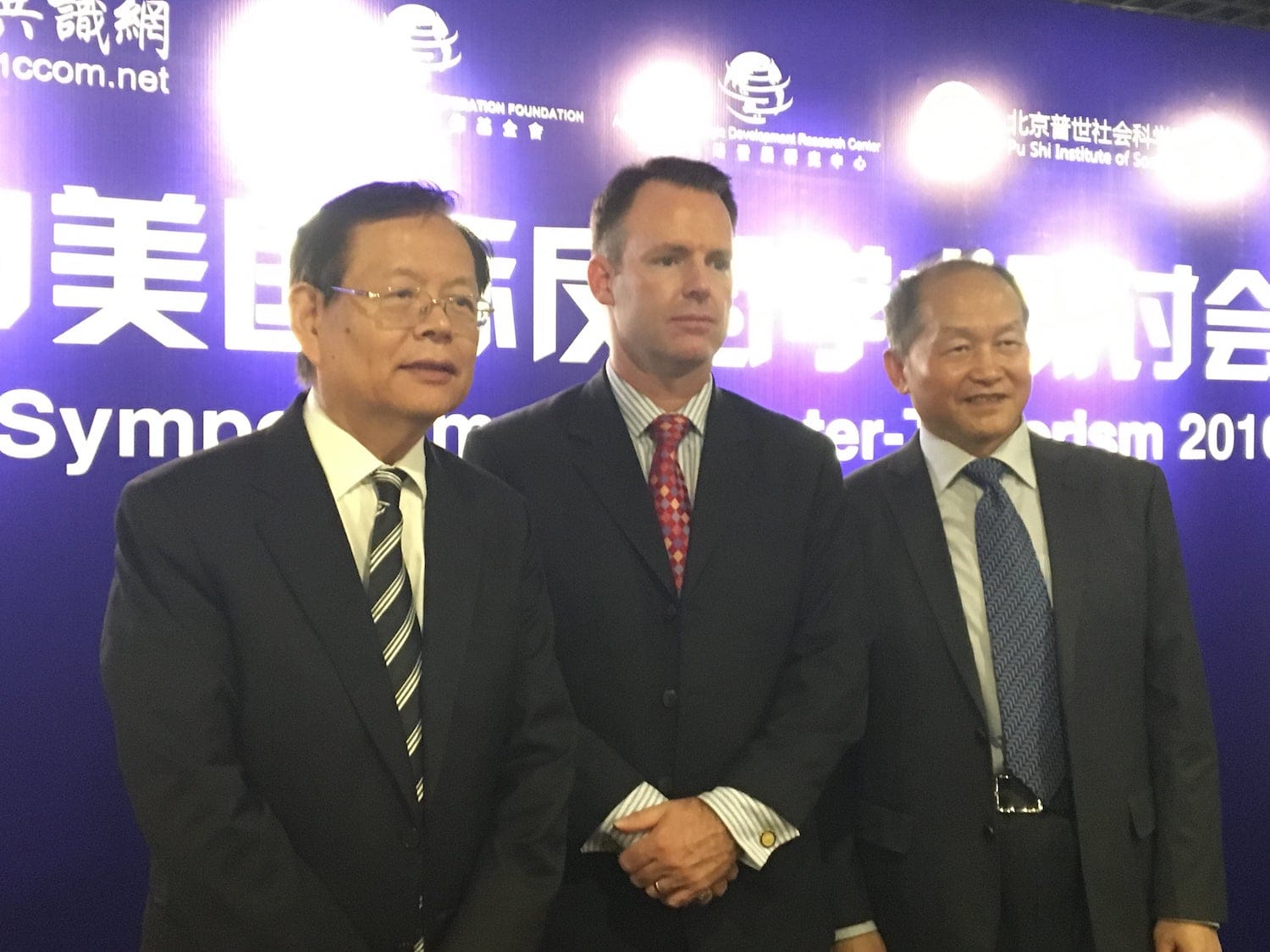 John Gallagher, President and CEO of the Institute for Global Engagement with the symposium hosts, Chairman Zhou Zhixing of Consensus Media Group and Professor Liu Peng of The Pu Shi Institute for Social Sciences. 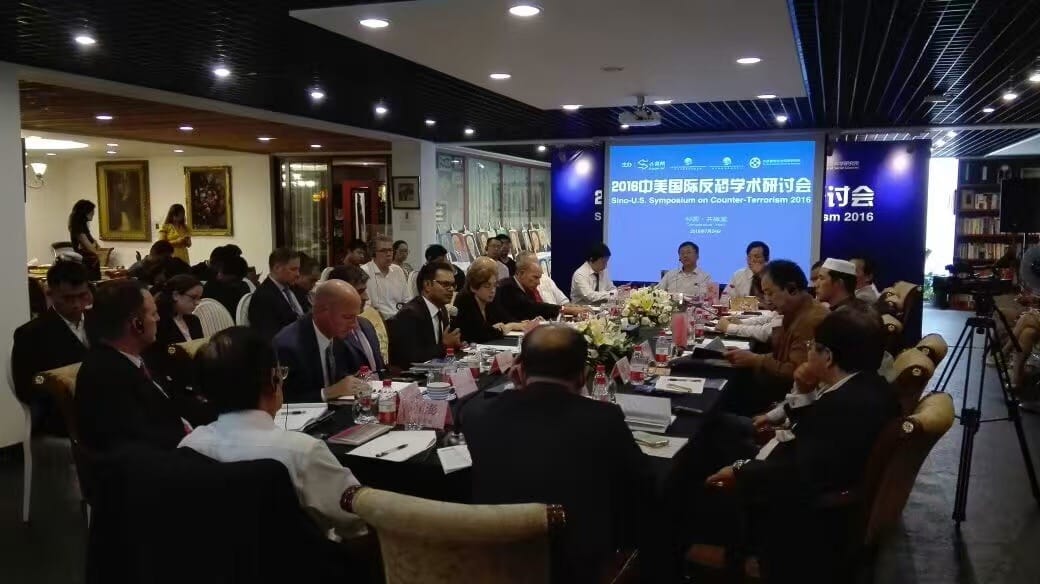 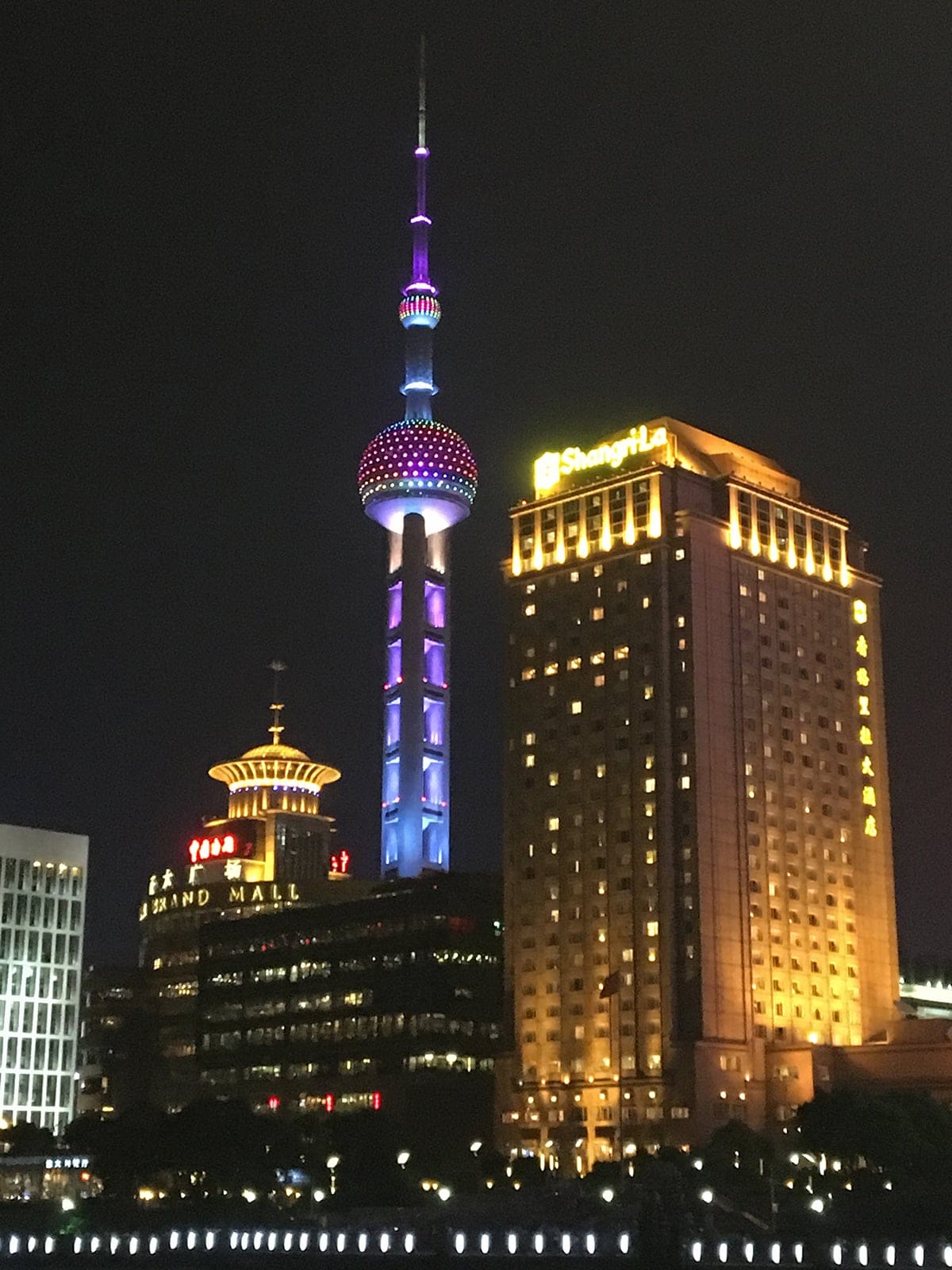 Following the Third Sino-U.S. Counterterrorism Symposium in Beijing, the IGE delegation traveled to Shanghai from July 25th to 26th to meet with other Chinese scholars and former officials and gain more understanding of China. 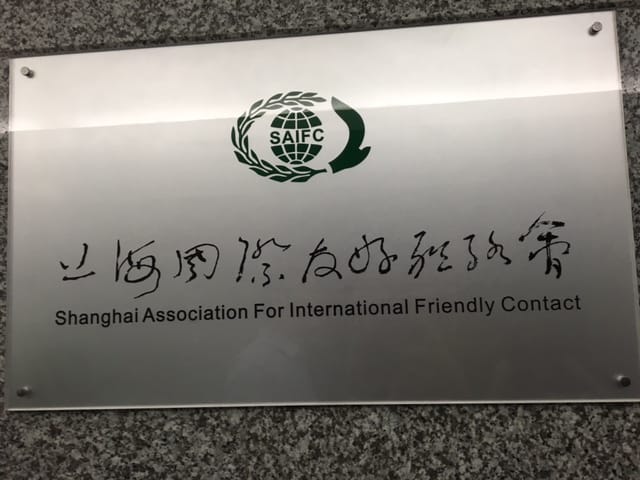 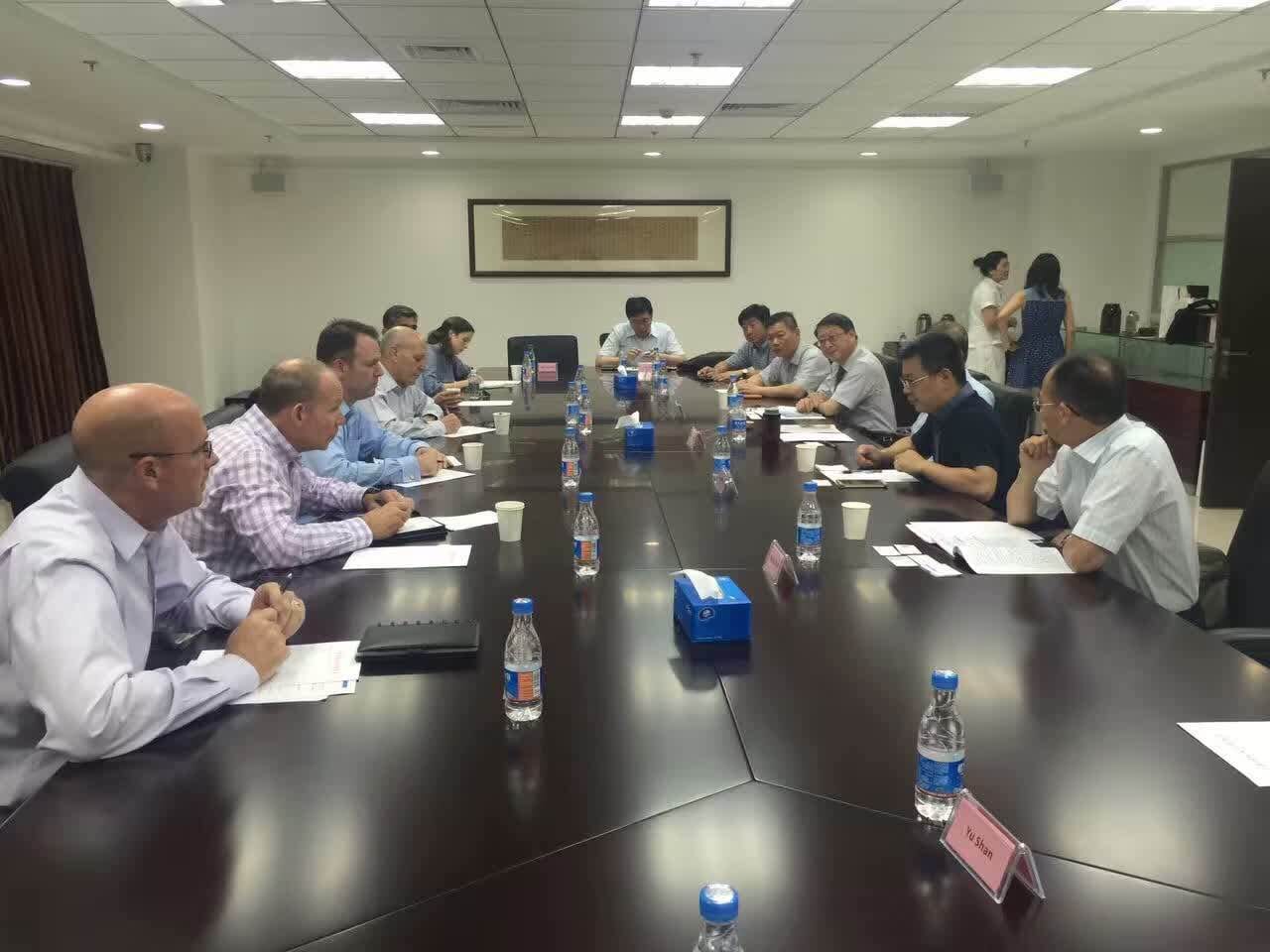 The two sides exchanged views on counterterrorism and countering violent extremism, and agreed that resolving such issues requires a comprehensive, synchronized approach that includes consideration of not only security but also governance and economic development. 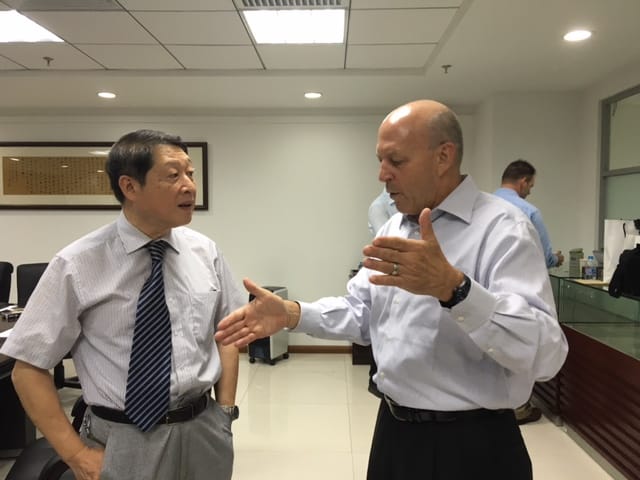 The two sides also discussed other issues related to U.S.-China relations, including the South China Sea, development along the Silk Road, and economic interdependence. 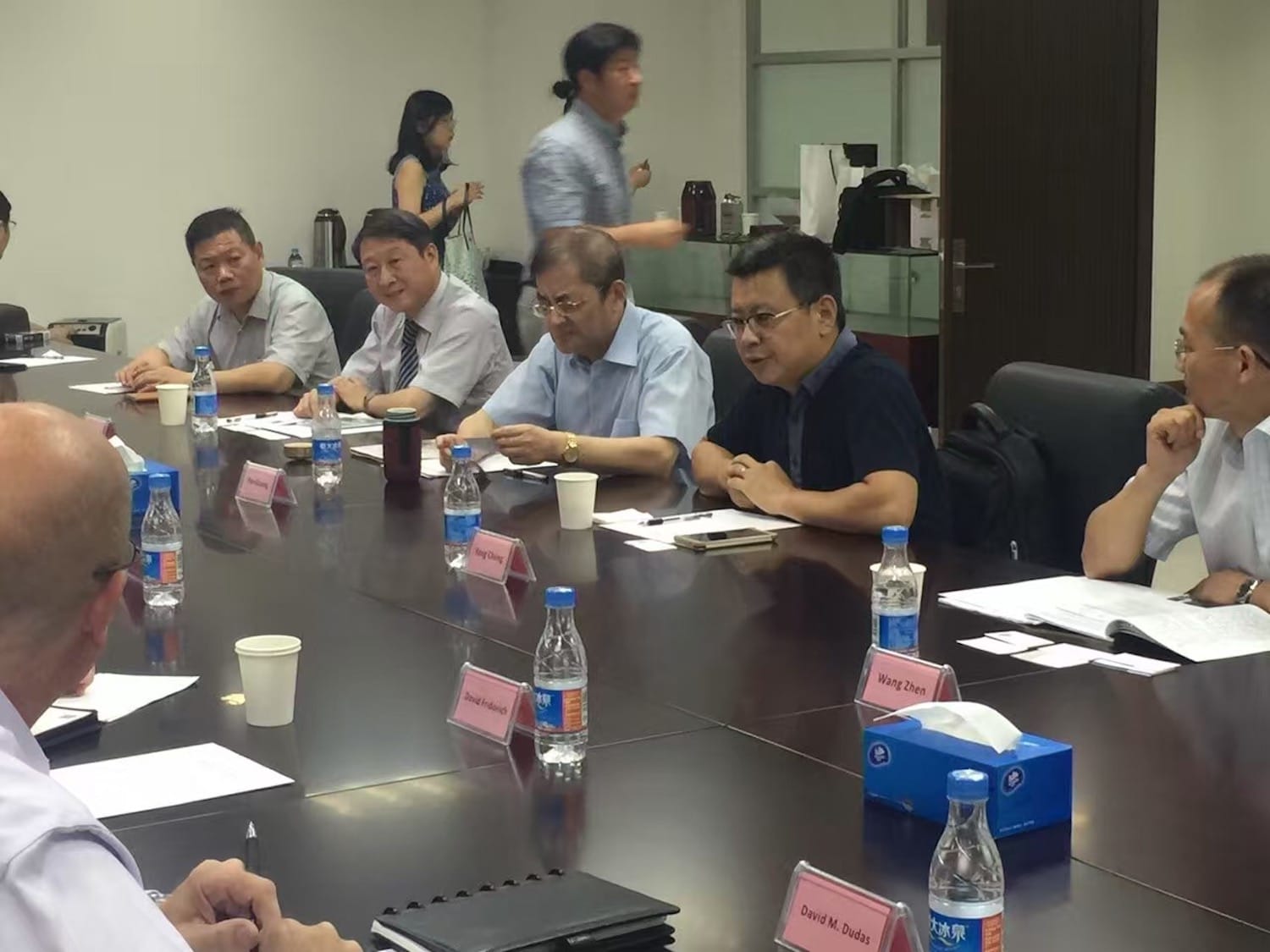 While there are diverging interests in many areas of U.S.-China relations, there are also many areas in which the U.S. and China can work together as "non-traditional allies" to address the root causes of violent extremism. 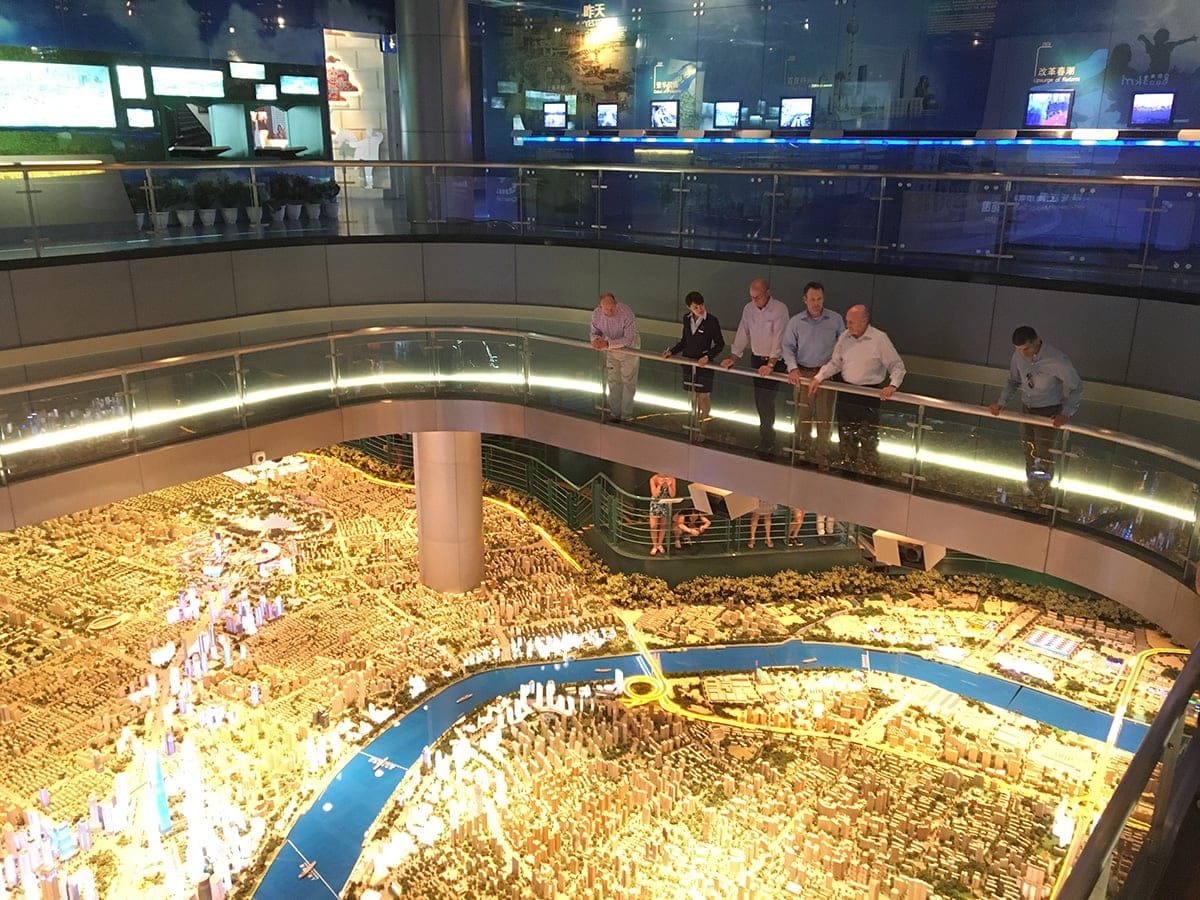 At the Shanghai Urban Planning Exhibition Hall, the IGE Delegation learned about the various considerations and planning that has gone into the development of Shanghai, a city of more than 24 million people and China's most populous city. 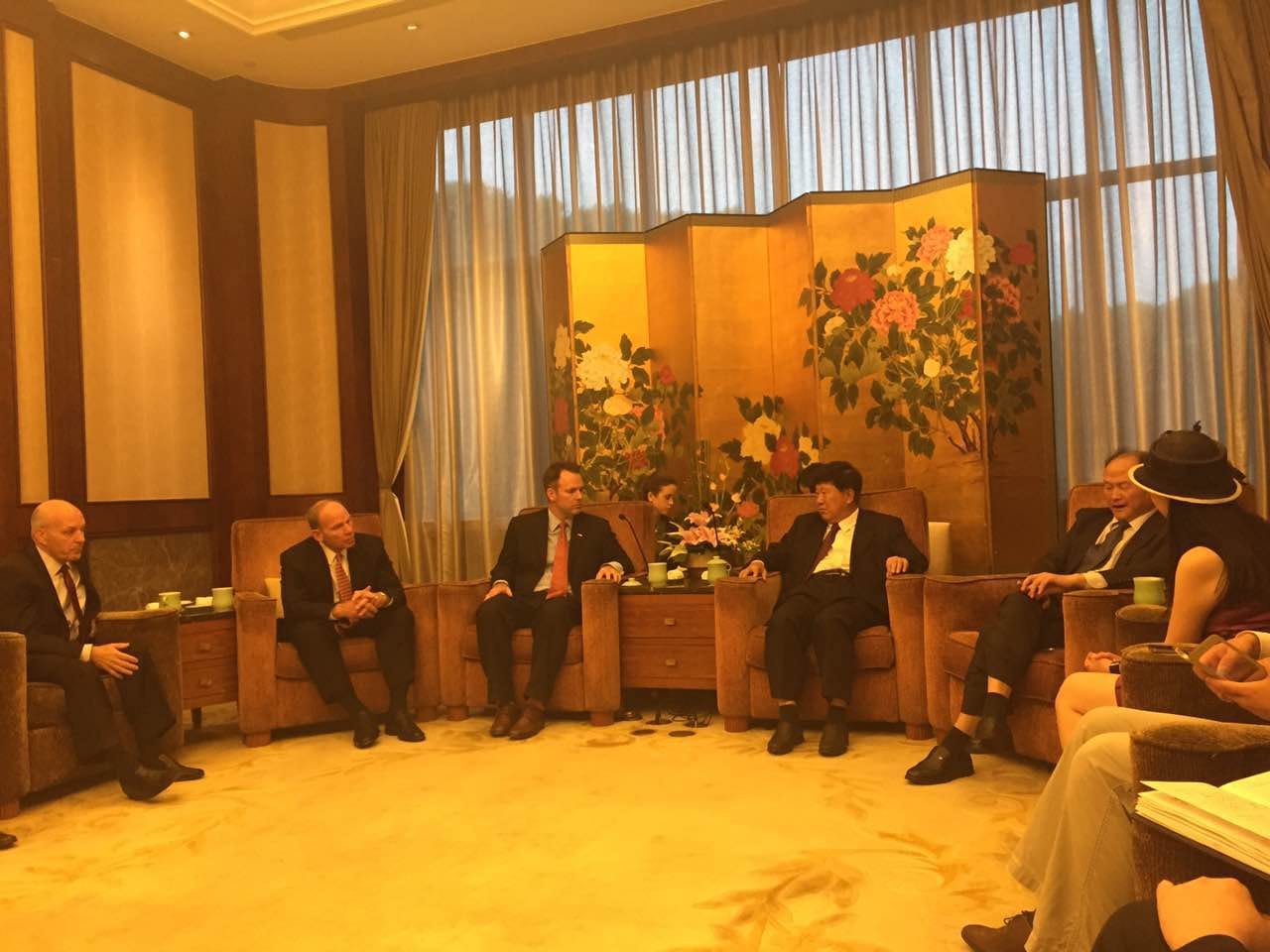 IGE President & CEO John Gallagher shared that nations with global hard and soft power capacity must work together to address the rising threat of terrorism and violent extremism. 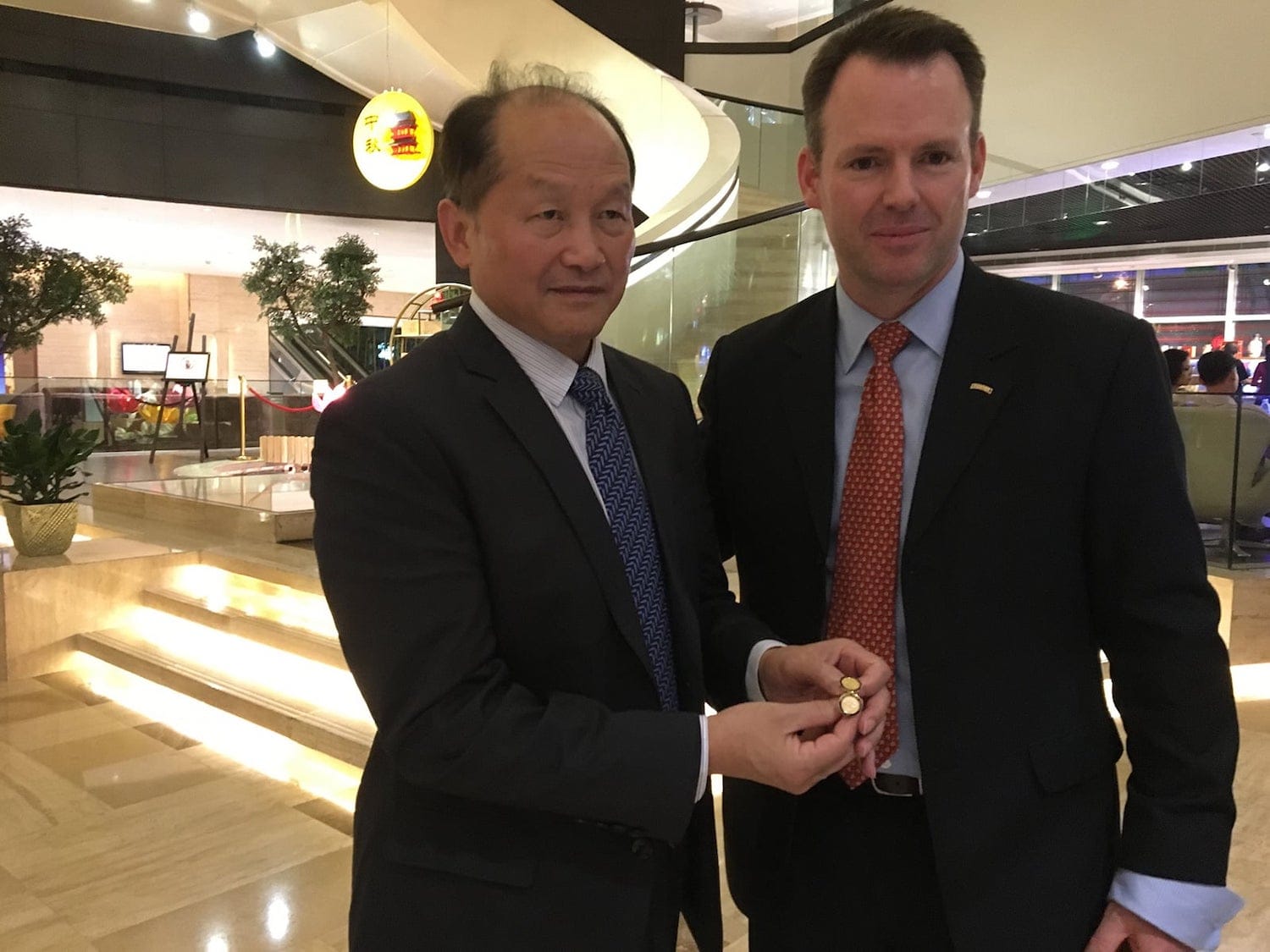 In appreciation for Consensus Media Group's (CMG) work in facilitating this trip to Shanghai and the Third Sino-U.S. Counterterrorism Dialogue in Beijing, John Gallagher presented CMG Chairman Zhou with a set of cufflinks that he had received after working at the White House on the National Security Council. 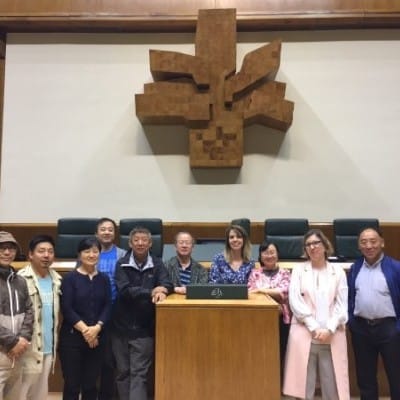