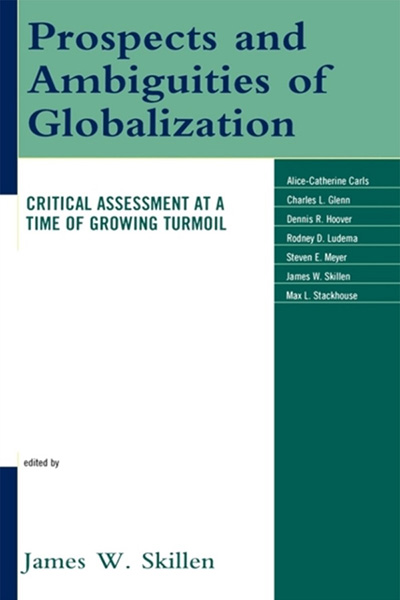 Center for Public Justice president James W. Skillen is the editor of a book due out in May titled Prospects and Ambiguities of Globalization: Critical Assessment at a Time of Growing Turmoil. Taking a long view of the kaleidoscopic changes now reshaping the globe, the book sheds light on a number of factors involved in the current international economic crisis. In his introductory chapter, Skillen writes:

"Our purpose, as authors, is to try to illuminate the global landscape and to provoke debate and critical reflection in classrooms and living rooms. Americans are go-getters, problem-solvers, forward-looking achievers. We want to get things done and make progress. We don't like barriers that stand in our way. We have a difficult time understanding those who don't share this approach to life. But what if the American way of life is sagging with doubts and hampered by growing weaknesses rather than gathering steam with one success after another? If, to some degree, whether great or small, doubts and weaknesses are growing, then critical reflection on global changes and on the foundations of American life is called for—and perhaps urgently so...

"Where will all of this take us? No one knows. The optimists point to all the achievements of globalization that are lifting millions of people out of poverty and are pushing countries toward greater cooperation to achieve their mutual and combined interests. Pessimists point to the growing tensions among peoples and nations over food, fuel, and water, and over control of the direction that global shrinkage should take. More wars and conflicts rather than fewer may be the result...

"As Christians we are particularly concerned to gain a deeper understanding of how people throughout the world—all created in the image of God—can deal with their responsibilities for, and their distrust of, one another. Rejecting all utopian illusions about the triumph of human goodness, contradicted as those illusions are by human selfishness, crimes, and hatreds, we also refuse to ignore the constant evidence of God's mercy and grace toward humans throughout all generations, a sustain mercy and restraining grace that make possible forgiveness, renewal, cooperation, and the continuing search for ways to resolve conflict and to build patterns and institutions of greater justice and stability."

Perhaps globalization, even more than postmodernity, is the dominant spirit of our times. This makes it one of the greatest challenges facing the twenty-first century. It is therefore essential that the Christian community, among others, grapple seriously with this reality. There are few more trustworthy guides through the tangled thicket of globalization than Jim Skillen. He has gathered together a fine group of scholars to address this issue from various disciplinary standpoints, offering an insightful opening and conclusion that bind them all together.