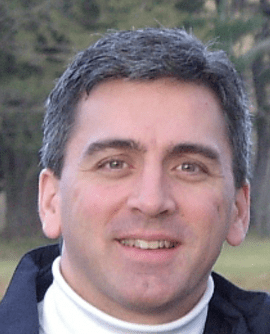 “IGE creates unique forums for rigorous scholarship and candid dialogue about the complex roles of faith in public life worldwide. It is a pioneer in the now-burgeoning field of religion and international affairs.”

He came to the Institute in January 2003 from the Leonard E. Greenberg Center for the Study of Religion in Public Life at Trinity College in Hartford, CT. He earned his doctorate in politics in 1997 at the University of Oxford. He earned his M.Phil. in Politics in 1992 at Oxford as well, studying modern theories of law and state, American politics, political theory, and the political institutions of advanced industrial societies.

Dennis lives with his wife, Dr. Ruth Melkonian-Hoover, in Hamilton, MA. They have adopted two children, Isaac (12) and Gabriella (5). The enjoy supporting and raising awareness for the Cystic Fibrosis Foundation. Dennis also serves on the board of deacons of First Congregational Church of Essex, MA.